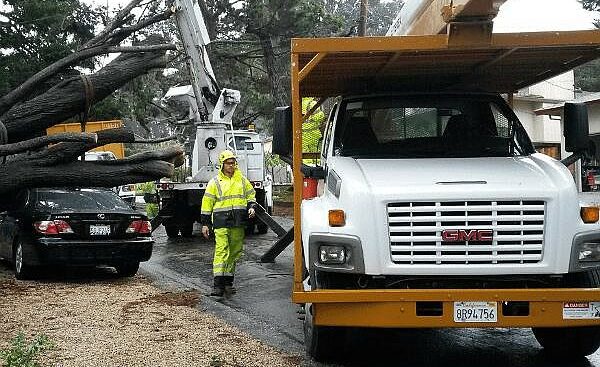 Chances are, it’s somewhere Mahoney’s company is contracted with to maintain the trees.

The executive oversees the state’s largest municipal tree maintenance company in the state, performing pruning, planting, removal, healthcare, emergency response and inventory services for cities’ trees. His focus on the profession since acquiring the business in 1973 has made him a go-to adviser by the California Department of Forestry and Fire Protection and state union council.

West Coast Arborists holds contracts with over 300 municipal agencies to manage more than 30 million trees, employs more than 1,000 workers across 18 offices and is projected to do $150 million in sales this year.

The company also has an urban wood recycling program called Street Tree Revival that turns trees from the streets that need to be removed into reusable, raw lumber and offers custom milling, surfacing and engraving services.

Not bad for what Mahoney said was originally just a side job in his hometown of Tustin.

The firm’s steady growth over the decades earned the company the Business Journal’s Family-Owned Business Award in the large business category of companies—those with more than 100 employees—during an Aug. 26 event at the Irvine Marriott.

The company’s seen growth every year of around 10% to 15%. The exception was 2009 during the subprime mortgage meltdown and subsequent recession.

“We’ve always been [profitable]. The thing with this business is we could work longer hours and work our way through it,” Mahoney said on a recent weekday as he oversaw tree planting at his own home.

Even in last year’s challenging environment, West Coast Arborists continued to operate as an essential business.

Today, there are three generations of the family now rooted within the company.

“It’s soon to be four,” Mahoney said, “but the fourth generation is sweeping floors for us on Saturdays.”

West Coast Arborists didn’t start out at the commercial level.

Mahoney, a Tustin High School graduate, was walking home from school one day when George Waldhauser, owner of the small business George the Treeman, stopped and asked him if he wanted to help him trim trees. It turned out the first house he serviced with Waldhauser was his own parents’ home.

He continued working for Waldhauser up until he was offered a chance to buy the business.

Mahoney’s father, a manager at Eastman Kodak Co. at the time, saw how serious his son was about the business and took him to Saddleback Bancorp in Tustin, and he pulled a loan to buy the business for $5,000 in 1973.

“Really, part of what helped us in our growth, was my father with all his management experience at Kodak. We got a lot of guidance,” Mahoney said.

“We did $16,000 in sales the first year. It was myself and my two brothers. Back then we were doing residential tree work.”

In the late ’80s and early ’90s, cities looked to trim their expenses with changes to property tax laws and began turning to the private sector for contracts.

Tustin was the first city West Coast Arborists landed a contract with to handle tree trimming and other maintenance.

“Then we got another city and another city. Fast forward to today, and we’re doing 330 cities with over 1,000 employees and we’re contracted with more than half the cities in California,” Mahoney said.

When the business was incorporated in 1978, Mahoney gave 10% stakes each to his brothers Richard Mahoney and Michael Mahoney, along with his father RJ Mahoney. Their father’s 10% stake transferred to their sister, Rose Epperson, upon RJ’s death in 1992.

The executive likes to joke the business probably went bankrupt three times, “but I wasn’t smart enough to know it and we just worked our way through it. We just reinvested almost everything we had back into the company and grew it from there.”

The executive team’s had its share of lessons learned along the way as the business ballooned.

The company prior to joining had faced labor lawsuits, and ultimately made the decision to solve the issue by joining the union, a move Mahoney said turned out to be in the best interest of the company given its size.

“For us, it’s been a real good thing for employees and for protecting us on the PAGA [Labor Code Private Attorneys General Act] lawsuits or class action wage-and-hour lawsuits,” Mahoney said.

The union also helps with alternative dispute resolutions, allowing the company to bypass litigation in court.

Part of what’s also paved the way for growth has been the company’s adoption of technology.

The company went digital in 1993 with computers and GPS tracking so cities could maintain detailed electronic records of their trees. That software management program is called Arbor Access.

“Originally, tree inventories were done on library cards and then we started doing the inventories on computers. Now, we’re doing GPS and when we do the work, we update the tree inventory history so cities can either get on their phone—we have a mobile app—or their computer and the inventories look like your cell phone bill history,” Mahoney explained.

Why does it matter? Trees can get sick and decay, get too close to utility lines or have damaged branches that could fall and cause accidents or injuries. Those “tree situations” have the potential of inviting lawsuits.

Mahoney said use of technology has helped West Coast Arborists keep clients and attract new ones.

“Why do we have 300 of the 480 cities [in the state] under contract? It’s because we have all this tree inventory and tech that we bring to the cities. Most of your typical tree companies are like what I bought. There are some bigger ones but, typically, they’re mom-and-pops,” he said.

Today, there’s no shortage of work and tree situations to handle, which is just fine for West Coast Arborists since moving forward has been Mahoney’s philosophy from day one.

Said the executive: “If you’re not growing, you’re dying. So, our model is we keep growing.”