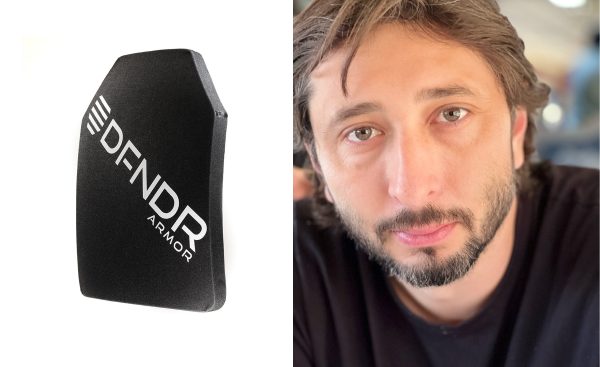 David Fernandez, President and CEO of DFNDR Armor, is an entrepreneur with 20 years’ experience in composite materials engineering and manufacturing of armor products for the defense industry.  From 2006 to 2012, David was the Vice President and Director of R&D at Armacel Armor, a family business founded in 1997 by his parents, which produced high performance rifle protection products for the US Department of Defense (DoD). David was instrumental in doubling company revenue every year from 2006 to 2010 and after securing multi-year production contracts with the US government, David negotiated the sale of Armacel in 2010.

David has served as a government appointed industry representative to the National Research Council for the Body Armor Testing and Evaluation Committee where he briefed scientist members of the Study Committee as well as senior government officials at the Pentagon and other various military bases.  David also lobbied for better protective equipment for soldiers including briefing the House Armed Services Committee and other House Members of the benefits of lighter weight armor systems.

David structured and produced award-winning proposals resulting in multiple year DoD production contracts and government R&D awards.  In support of those contracts, David co-developed a unique cost effective body armor torso plate, meeting all stringent quality and performance specifications, which led to millions of dollars in cost savings for the US Army.  During his time overseeing production, he served as a professional witness for body armor testing and evaluation, with a 100% success record in Lot Acceptance Testing.

In 2013, David founded Engense Inc. dba DFNDR Armor to address further needs for lightweight military and law enforcement armor.  David self-funded the company.  After 3 years of internal R&D, he presented new technological improvements to the US DoD.  This led to two 3 year Government funded research and development contracts from the Army and Special Operations Forces with a total of $4.5M funded.  Both programs were very successful and as a result of meeting the lightest weight specifications with Army, David’s company was awarded a $150 million IDIQ contract with the US Army to produce the ESBI Vital Torso Protection Armor.  David’s company has been in production on this contract since 2021 and is expecting revenues to triple in 2022.

Since 2004, David’s other business passion has been sourcing, renovating and owning commercial buildings throughout Los Angeles County.  David has served as a board member of the Ventura County Medical Resource Foundation and contributes to institutions and charities including Pepperdine University, Boys & Girls Club, Blue Heron Foundation, Saving Innocence Foundation and CASA for Children.

David earned a degree in Business Management from Pepperdine University in 2007.  David is an avid golf player and an instrument-rated pilot.  David is fluent in Polish and English and has basic knowledge of Spanish.  David resides in Thousand Oaks, California with his wife and daughter.